While discussing some of my health concerns with a friend, she mentioned that she was getting regular “community acupuncture” treatments and recommended it. I had never heard of community acupuncture, although I’d had acupuncture a couple of times in the past. It was successful in helping start my labor when I was pregnant with my first child and two weeks past my due date. I went back another time after having two miscarriages, and again when I was getting weird rashes. I liked the way I felt immediately after the treatment, but at $75 per visit, I couldn’t afford to go often. My health insurance didn’t cover it, either.

My friend said, “Community acupuncture is wicked cheap! It’s great, it’s getting me through the winter.”

What is Community Acupuncture?

I did some research and found Metrowest Community Acupuncture not too far from me in Milford, MA. I learned that they charge a sliding scale fee of $15 - $40, with a $10 paperwork fee for the first visit. I easily made an appointment via their website. The clinic is located on the second floor of a small office building (with an elevator) across from a car dealership. At my first appointment, an acupuncturist met with me briefly in the office to learn why I was seeking treatment, then invited me to head into the treatment room.

Peaceful music and the sound of a gentle water fountain greeted me as I took in the surroundings. Several recliners lined the perimeter of the softly lit room, some with people in them looking very relaxed. I chose a seat, removed my shoes and socks and got comfortable. The acupuncturist moved quietly around the room, checking on other patients before scooting over on her rolling stool to attend to me. She checked my pulse, then inserted several tiny needles in various points on my hands, lower arms, lower legs and feet. Then she left me to rest. After some amount of time, during which I’m pretty sure I fell asleep, she was back to remove the needles and sent me on my way. On subsequent visits, the acupuncturist on duty comes over, checks in with me at a whisper about how I’m feeling, feels my pulse, places the needles, then lets me rest. It varies where the needles go, according to my symptoms and the acupuncturist’s experience with different acupuncture points.

I love how I feel during and after acupuncture. The needles are very thin, and gently stimulating. I feel calm afterwards. I get relief from my symptoms, affordably and without drugs. The treatment room has a healing energy when multiple people are there at the same time. I now have a "favorite chair" in the room.

It's a Whole Network!

One day, after a treatment, I noticed a poster in the reception area, showing all the community acupuncture clinics across the United States. I took a picture and posted it on Facebook, wanting to help spread the word of this network. 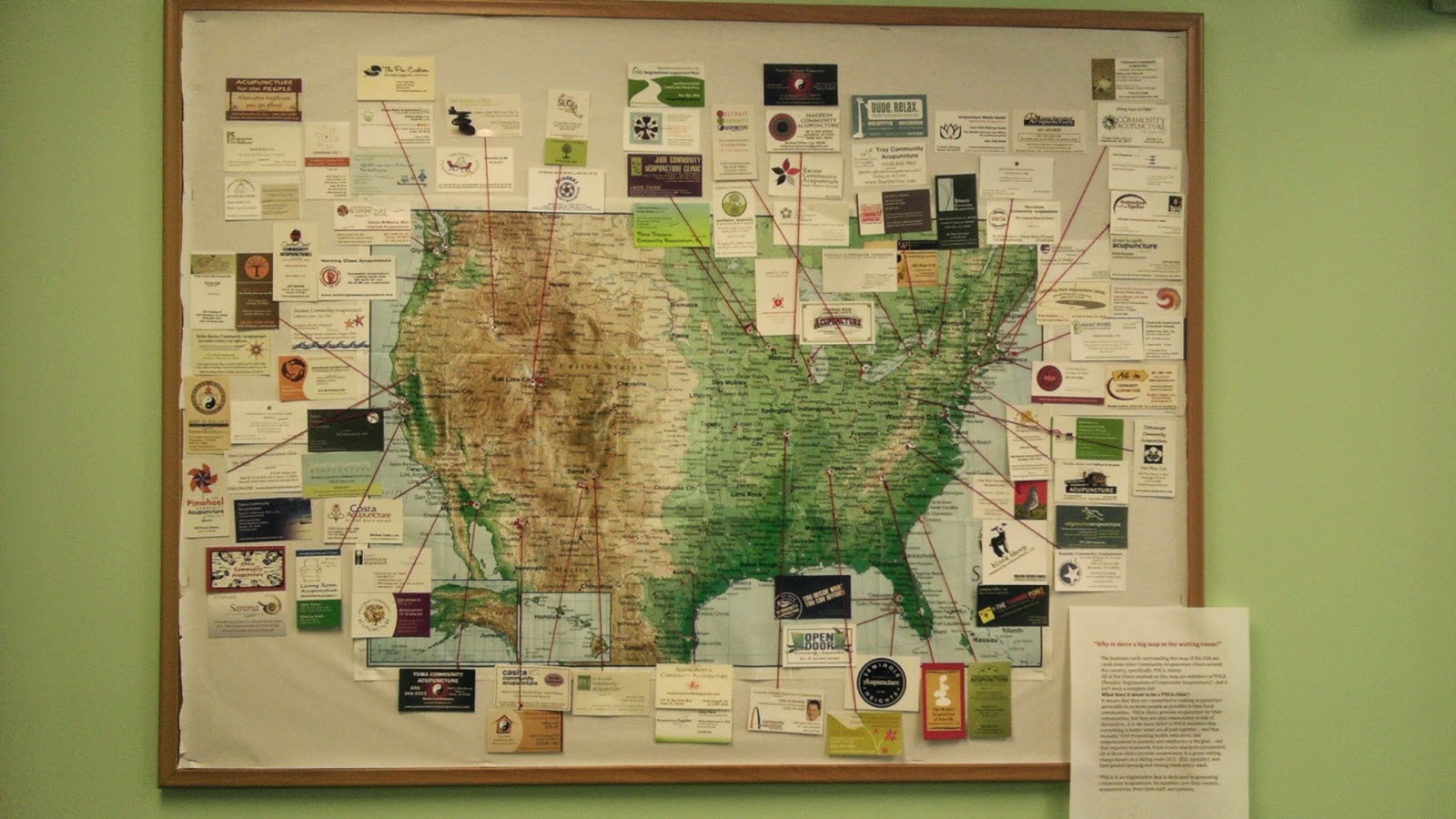 After my next treatment, I noticed this poster: 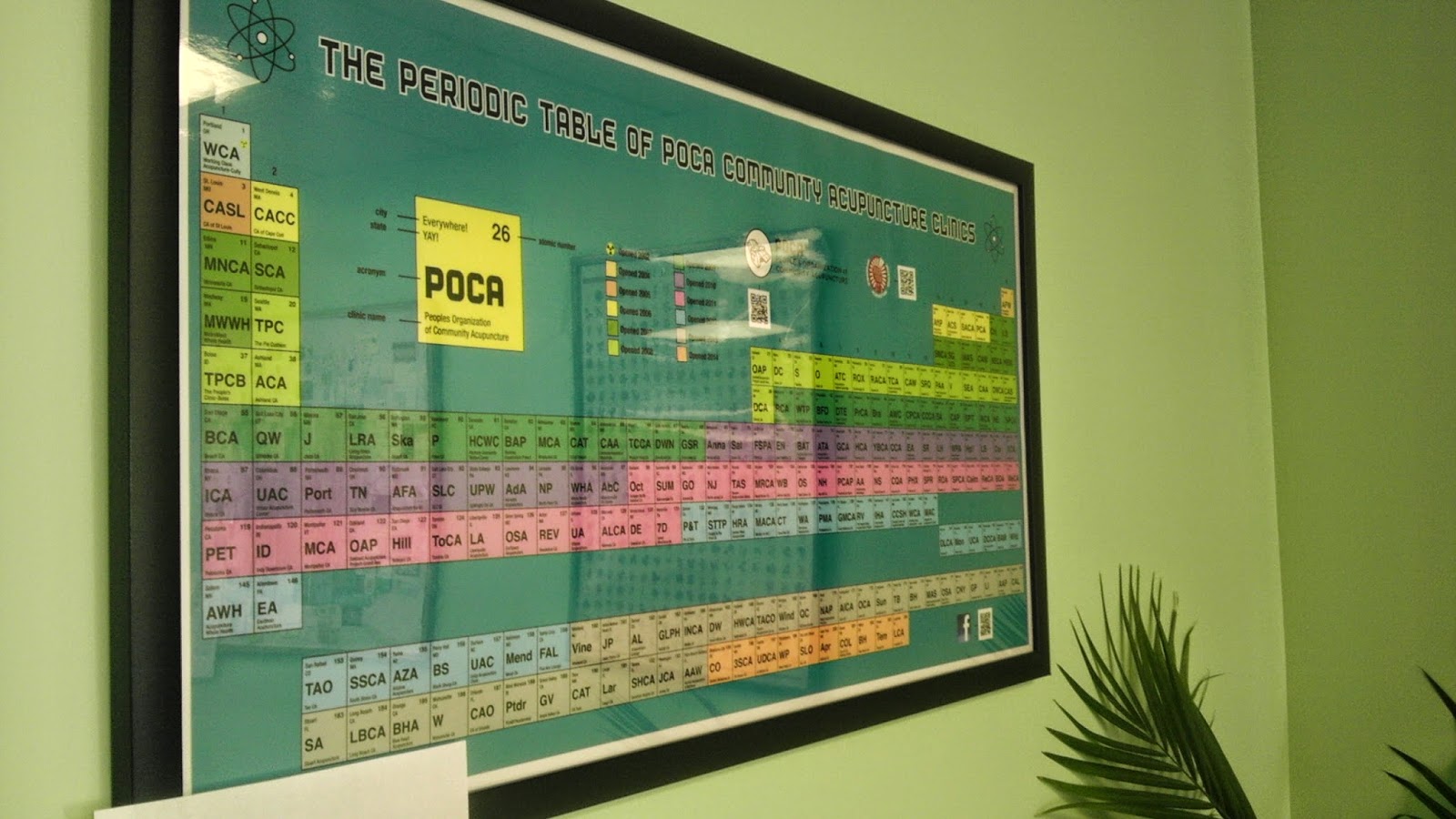 I had to know more. Below the poster, the clinic has a shelf with books, and I asked to borrow Fractal: About Community Acupuncture by Lisa Rohleder.

I read the whole book in one night, I was so excited about it. Rohleder shares her experience after graduating from acupuncture school in 1994, starting a private part-time acupuncture practice and doing auricular acupuncture (that’s on the ears) in a drug and alcohol treatment program, which used the National Acupuncture Detoxification Association protocol. Over time, she realized that her options were to either treat private clients who could afford to pay the market rate for acupuncture, which at that time was $65, or practice in a public health setting for people who were poor enough to qualify, which meant very poor. It bothered her that there wasn’t a third option for working class folks, which is most of America. Her time doing auricular acupuncture in a group setting gave her the idea that she could treat other things besides drug and alcohol addiction in a similar way.

The idea was to make it affordable for people to get frequent treatments, which makes acupuncture more effective. And the setting would be unpretentious and comfortable, like a friend’s living room. Rohleder and her partner Skip Van Meter opened a space in their neighborhood in Portland, Oregon with 12 recliners, charged a sliding scale fee of $15 - $35, and booked appointments every 10 minutes. They called it Working Class Acupuncture, which has now grown to three locations with 20+ employees.

In 2006 Community Acupuncture Network (CAN) was created, and more community acupuncture clinics were opened around the country. They realized they had what 2006 Nobel Peace Prize winner Muhammad Yunus calls a “social business”, which is cause-driven rather than profit-driven. By 2010, they wanted to recognize the importance of patients’ investments in the movement, and learned that a multi-stakeholder cooperative would be an ideal structure to include consumers and workers. In 2011, the People’s Organization of Community Acupuncture (POCA) was incorporated in Oregon.

I promptly joined POCA as a patient/community member. At my next appointment, I told the acupuncturist how enthusiastic I was to learn about POCA. She suggested I talk to Steve Kingsbury, the owner of Metrowest Community Acupuncture.

Steve and I met for lunch during which I scribbled notes while he told me his story. Steve came to acupuncture as a second career. He had long been interested in Eastern religion and culture, including acupuncture, and saw an ad for the New England School of Acupuncture (NESA). He was pleased to learn that one could learn acupuncture here in New England and told himself he could pursue it after retirement, which is what he did. He attended NESA and learned about Community Acupuncture as he was finishing up the program. In 2007, he attended a workshop by Community Acupuncture of Cape Cod founder Diana Di Gioia and read Lisa Rohleder’s book The Remedy. Steve knew this was the business model for him. He opened Ashland Community Acupuncture in 2008. He got involved in CAN and participated in the online discussion boards. When POCA was created, Steve, with his MBA in Finance and 30 years of experience in corporate America, was a good fit for the role of Operational Leader for the Finance Circle. (POCA is run as a sociocracy, and you can read more about that here.) In 2014 Steve took over what is now Metrowest Community Acupuncture. He spoke of the connections he has made with his clients over time and what a pleasure it is to help people affordably improve their health.

Acupuncture has been around for at least 2,000 years. I asked Steve to explain how it works. “The needles communicate with the body,” he said. No one knows exactly how it works, but the body can heal itself when the needles communicate with it. People talk about qi (pronounced “chee”), that it’s energy, and that the needles free it up to go where it’s supposed to go. It helps all varieties of ailments, including stress, inflammation, and pain, with no negative side effects.

It doesn’t sound like a community acupuncture clinic will be opened in my town any time soon. Sigh.

I wondered if any community acupuncture clinics are worker-owned cooperatives.  I contacted Lisa Rohdeler to ask. She replied, “Actually, we were planning to become worker-owned, but we chose to become a 501c3 nonprofit instead, because this will make our acupuncturists (who are all heavily burdened with student debt) eligible for the public service loan forgiveness program.” She said other CA clinics are doing the same.