While we were passing through the town center this morning, we saw a new banner hanging outside the former French Memories location. Judging from the sign, I had a feeling this was not the "farm-to-table" restaurant we'd been hearing about. 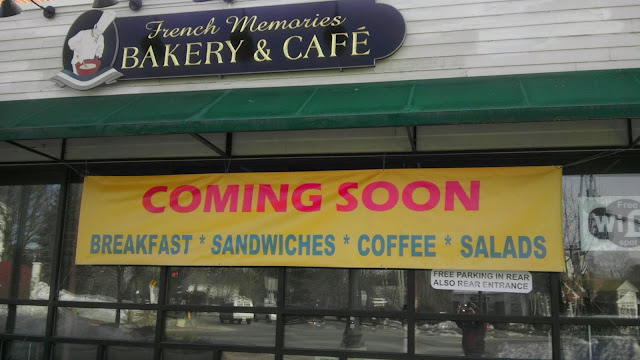 I had a chance to stop by later. There was construction happening inside, but the three men working took a break to give me the scoop on their plans. They are not the "farm to table" people who were previously going to open a restaurant on the site. Those folks must have bailed.

So who are these new guys, and what are their plans? They are Israelis from Weymouth and they intend to open Angel's Cafe on April 1st. The more talkative of the three told me they have had many residents stopping by to ask questions and give suggestions. It sounds like they will take coffee seriously and are open to input from the community. I asked if they would be kosher and the answer was sort of "no - but": they want to be open on Saturdays but will not serve pork products, nor will they have egg and cheese items on the menu. However, they will work with a customer if one wanted cheese on their egg sandwich. I don't claim to know much about keeping kosher - I'm just reporting what I was told.

Anyway, I wish Angel's Cafe many years of success and will certainly visit this spring.

You might be wondering, how does this development affect our vision for a local worker-owned cooperative cafe? I say: the fewer empty storefronts in the town center, the better. It doesn't do us much good if another cafe fails in the center. I concede that we will need to tweak our business model plans. Moving forward!

We also noticed some action happening at the old Mangia location. A couple of weeks ago, I read a "closed for construction" sign on the door, and then this morning saw this one: 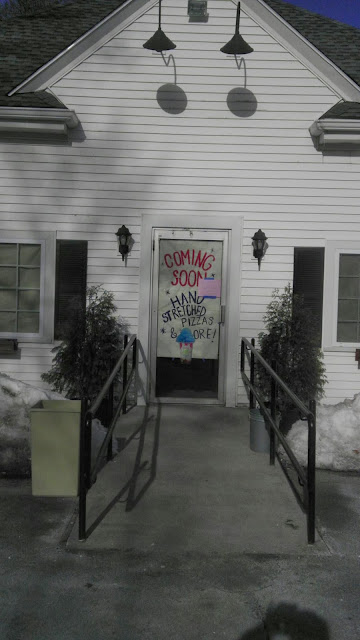 It appears we have another pizza place coming to the town center. I wonder what happened to the Mangia people, and the people who took over from them? I hope they took the TVs with them when they left.

In other news, we wanted a coffee on our way to grocery shop this morning, and found ourselves at a Starbuck's. As I've been saying here on my blog, we have very few choices in our town for coffee!

What the heck is this doohickey in the sipping hole on the lid?! 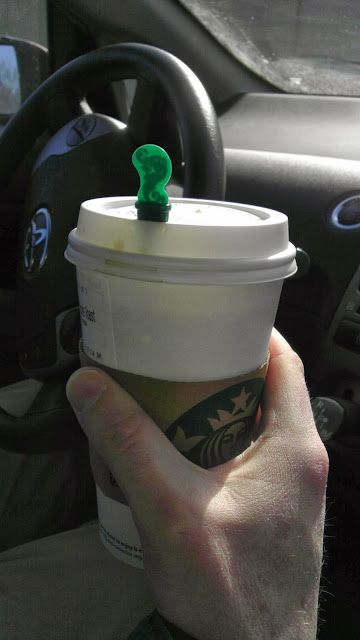 It's like a decorative toothpick/stirring thing. Maybe we are behind the times, not being dedicated Starbuck's drive-through customers, but this was new to us.

And we found it STUPID.

First of all, Chuck got it caught on the edge of his window as he was pulling his coffee off the drive-through counter, not realizing he needed extra clearance for it, and spilled coffee on his pants. Even if he hadn't made this error, why did they think he needed a stirrer? Don't the baristas stir our coffees? What if he'd ordered his coffee black, would he still get the decoration? It just seemed like a silly waste of plastic.

Last thing to report: we will be working on our business plan this evening, brainstorming ideas with K. and B.

Let us hear from you!
Posted by Cafeedia at 4:05 PM